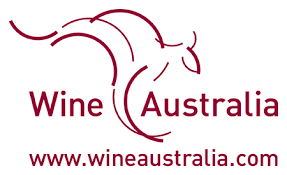 Australia is a country that I used to travel to regularly so I was excited about my return in October 2015 with 44 other Masters of Wine on a tour that took in New South Wales, Victoria and South Australia. Since parts of Australia are 4.4 billion years old, the oldest known things on planet earth, it is not too surprising that the scenery had changed little since my last visit 16 years ago. I delight in Australia’s uniqueness, a home to flora, fauna and a landscape that are distinctively, beautifully, and sometimes dangerously, Australian. Since my last visit, there have been periods of extreme drought and widespread flooding (the 2011 vintage was tricky…..) and, while we were revelling in a superb tasting in Yarra Valley on the hottest October day on record, we heard that a “controlled burn” had been fanned by the wind and was causing havoc just a little to the north-west. Australia looks different, feels different and, given the constant and exotic birdsong that accompanies every outing, it sounds different too. And the wines? On this visit, we tasted a diversity of styles that I don’t believe any other country can match; at least not at the same quality level as Australia.

Stylistically, the most significant change since my last visit has been the sourcing of fruit from vineyards planted in cooler areas: Mornington Peninsula, Yarra Valley, Adelaide Hills and, above all, Tasmania have all taken centre stage. This has had a significant effect on wine styles, notably sparkling wines, Pinot Noir and Chardonnay. Penfolds, always a benchmark, have access to top quality grapes from all over the country and in recent vintages they have chosen to source their flagship Yattarna Chardonnay mainly from Tasmanian fruit – with wonderful results. Similarly fine, mouth-watering Chardonnays, often at around 12.5% alcohol, are being made in Mornington, Yarra and a number of other areas we didn’t visit. We tasted Pinot Noir from the Yarra Valley (Mount Mary, Gemtree Hill, Mac Forbes and others) and Mornington (Yabby Lake, Montalto and Mooroduc in particular) that I would happily put up against Pinot from anywhere else in the world – and which would certainly give wines from across the Tasman Sea a run for their money. On our first tasting, hosted at Sydney Opera House (yes, we were spoilt rotten), we tasted sparkling wines from Luke Lambert (Yarra), Courabyra 503 (Tumburumba) and Hardy’s/Ed Carr’s House of Arras (Tasmania again) that were outstanding. For those who think that Australia is a hot country, producing nothing but big, alcoholic blockbusters………. Times have really changed.

On a similar theme, we tasted high quality Riesling from a number of sites, most particularly the Clare and Eden Valleys, including a visit to Jacob’s Creek’s dramatic, steep and rocky Steingarten vineyard. At 10 years old or so, the Rieslings from top sites such as Steingarten and Jim Barry’s Florita vineyard show fabulous balance, depth and complexity. Best not to mention petrol or kerosene characters though: these are now associated with compounds produced by the grape to protect itself against direct sunlight, and steps are being taken to manage the canopy in such a way as to reduce their impact in future. No such issues in the Hunter Valley where Tyrrells and McWilliams showed a range of Semillons that were every bit as fresh, brisk and dry as we have come to expect from this distinctive, low alcohol wine style. Even the Hunter Valley Shirazes shown by Tyrrells had a Syrah-like peppery freshness and cool climate swagger that would have been unthinkable 20 years ago. And then there were the crisp, dry Fiano’s and Vermentino’s from McLaren Vale and the highly appetising Sauvignon Blanc from Shaw & Smith in the Adelaide Hills……… Australia is certainly ensuring that it is well supplied with crisp, light aromatic whites, no doubt in part to stem the tide of imported Sauvignon Blanc from New Zealand.

However, there were occasional discordant voices in amongst this diet of zest, freshness and minerality. Some of the Chardonnays leant so heavily on reduction and acidity for their character that they were lean in body and light in actual flavour. This style may find favour in Australia and in wine competitions where winemakers’ peer groups evidently appreciate these characteristics. But there was a definite feeling amongst some in the group, which was fully international with most coming from Europe, that this approach may be too far removed from what people expect from Australia to achieve commercial success in export markets.

That opinion is based on the premise that most wine lovers and drinkers associate Australia with wines of flavour. Fortunately this is still in abundance. Visits to Penfolds, Jacob’s Creek, Yalumba, De Bortoli, Taylors (known as Wakefield on many export markets and, on this evidence, just as successful with Clare Valley Cabernet Sauvignon as Shiraz) D’Arenberg and Brown Brothers yielded a host of wines that combined traditional styles and flavours with the extra freshness and purity of fruit that we have come to expect from modern winemaking. As well as wonderful wines made from all the top international varietals, we tasted exciting Grenache from Yangarra, Bekkers and Drew Noone MW amongst many others. Producers in McLaren Vale and Barossa kindly gathered to show us Savagnin, Durif, Tempranillo, Gruner Veltliner, Touriga Nacional and Verdejo, along with a myriad of different blends. Australia is alive with innovation, led by the “hands-off” approach of many smaller winemakers, the fruity wine styles and new varietal crosses of Brown Brothers, and the range of Jacob’s Creek wines aged in whisk(e)y casks. These are exciting times for Australia. And yet…….

The elephant in the room is that a minority of Australian wine producers are actually making money. Sadly there was not time during the trip to debate this issue, so my thoughts below are largely speculative. We were shown many of Australia’s greatest wines, often made from old vines and therefore from pitifully low yields. Superb, world class wines such as Penfolds Grange, Henschke Mount Edelstone and Hill of Grace, Campbell Rare Rutherglen Muscat, Seppeltsfield Para and Chateau Tahbilk “1860 Vines” Shiraz have earned their reputation and super premium price over many decades. Occasionally a standout wine such as Giaconda Chardonnay or Torbreck RunRig might gain stardom more rapidly but, for the main part, hard work and patience are the order of the day. Consequently it is a little disturbing to see some producers setting extremely high prices (hundreds of AUS$) on wines that have no track record or history of success. Admittedly the cost of living has risen significantly in Australia since I was last there, but it still seems to me that any wine selling for over, say, AUS$ 80 should have to work its way to the top. The push for profitability is critical but pricing still needs to have some logic.

Since Australia’s last hugely successful export drive in the 80’s and 90’s, export markets have obviously become more competitive as more new world countries have entered the fray and Europe has fought back. Therefore margins must be tighter and producers do need to question how they make wine and do business. My impression during the trip was that, from a quality point of view, most of Australia’s wine is better than ever and ideally suited to modern tastes. I do wonder if those making dramatic changes to their wines are going to an extreme that risks alienating customers. If Australian wine is struggling to be profitable, it strikes me as a marketing issue rather than a winemaking one. I am not the first to say it but, as the major supermarkets cut back on ranges, the key will be to identify and supply the routes to market that are opening up for more profitable (and not necessarily super-expensive) wines.

In 1996, the Australia Wine Industry published its seminal Strategy 2025 document which stated

“The vision is that by the year 2025 the Australian wine industry will achieve AUS$4.5 billion in annual sales by being the world’s most influential and profitable supplier of branded wines, pioneering wine as a universal first choice lifestyle beverage.”

Remarkably, Australia had achieved its value targets within 10 years and its longer term influence in driving wine’s position as a lifestyle beverage around the world is indisputable. The emphasis now has turned towards the production and profitable marketing of higher value, regional wines. Another point made in that Strategy 2025 document was that Australia is a leader both in terms of strong brands and market mind-set. The evidence suggests that Australia still leads in both areas: if on-going international success is a marketing issue, where wine quality and business acumen go hand in hand, I certainly wouldn’t be betting against the Aussies. 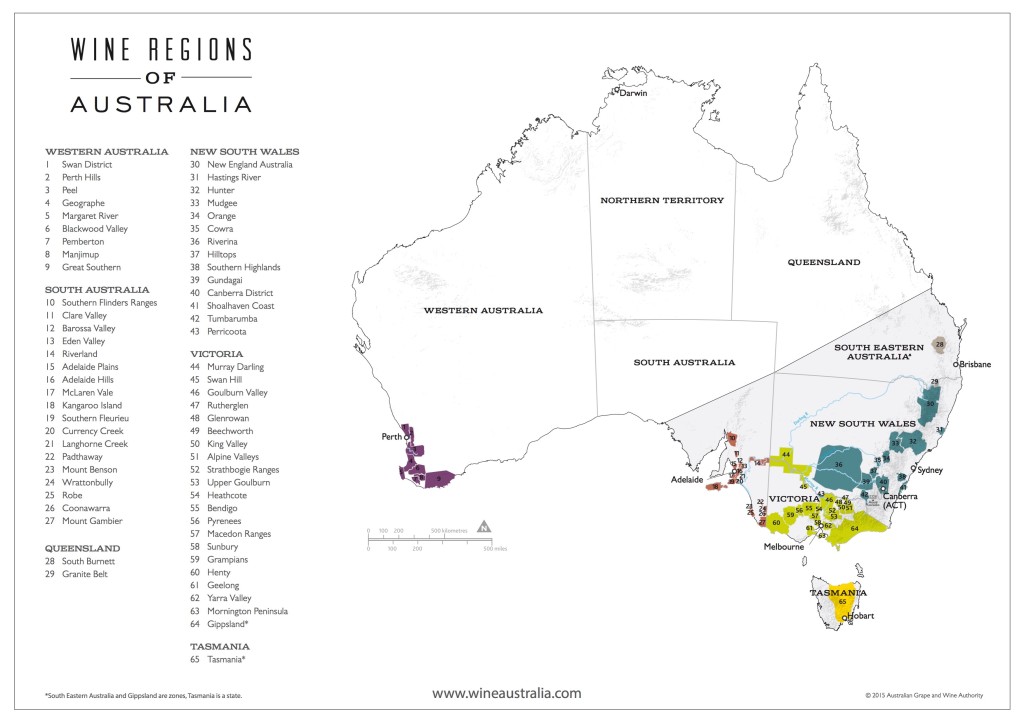 With thanks to Australia’s First Families of Wine (in italics in the text), Wine Australia, Treasury Wine Estates (Penfolds), Jackson Family Wines (Yangarra), Jacob’s Creek, Seppeltsfield, Shaw & Smith and the winemaking communities of the Mornington Peninsula, Yarra Valley, McLaren Vale and the Barossa – the trip of a lifetime.