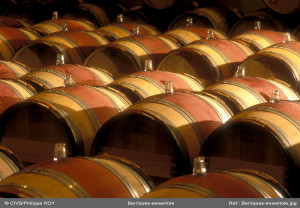 Every year in April, the great and the good of the wine world descend on Bordeaux to taste the new vintage.  The sort of wine pilgrimage that other wine producing regions of the world can only dream of.  French wine producers are often accused of being poor marketers, but they have certainly hit the jackpot with this one.  On the back of this event, the top 200 or so estates in Bordeaux fetch ever higher prices and the Médoc, previously a pretty run-down area, looks increasingly prosperous.

This year, I took over a group of British journalists and our group somehow expanded over there to include several Spanish (sorry, Catalan – they were from Barcelona) sommeliers, a German collector, some French journalists and Laura for a day and a half! It was a dream week.  We didn’t taste the 100 wines a day that some visitors seem to manage (and invariably regret), but we did visit some wonderful estates. I do not aim to make you envious, but if you visit Lafite, Margaux, Palmer, Mouton-Rothschild, Haut-Brion, Climens, Cheval Blanc,Le Pin, Ausone, Figeac and many others, you do feel hugely privileged. 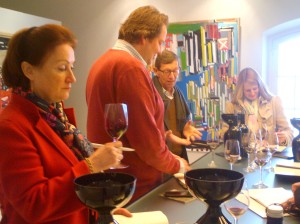 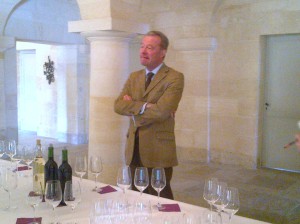 Perhaps perversely, I don’t think the main objective of the week is to taste all the wines methodically and write copious notes.  The wines, being only 7 months old and in many cases destined for long lives, are notoriously difficult to taste and assess – and I have nothing but admiration for those that have to do so for their job.  My main aim is to chat, listen and gain an overview of the vintage – the overall style of the wines, which appellations seem to have fared best, whether the Merlot- or Cabernet-based wines are more successful and which châteaux seem to have over- or under-performed. 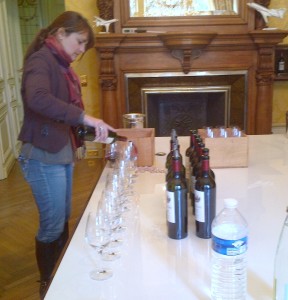 And my conclusions?  Well, considering how difficult the growing conditions were in 2012, the vintage has turned out remarkably well. The wines have greater purity of fruit than I was expecting, more flavour, plenty of structure and the potential to age well in the medium-term.  Many think the best appellations were Pomerol and Pessac-Léognan, and there is a general feeling that the vintage was particularly successful for the Merlot-based wines of St. Emilion and Pomerol.  Mind you we only visited the top estates and we were constantly reminded that it was a very expensive vintage in terms of vineyard management and resources.  It may well be that the wines are harder work lower down the price scale. Overall, it is a good vintage but not a great one.  The least successful wines were probably those from Sauternes and Barsac, although Climens was rather tasty!

From a commercial point of view, as many others are pointing out, whether this is a vintage to buy or not depends on the pricing.  The wines are better overall than 2011 but there is a lot of unsold 2011 left in Bordeaux cellars:  so the prices of 2012’s are likely to be lower than 2011, which makes 2011 a particularly poor buy at the moment.  It is unlikely there will be strong demand for Bordeaux 2012 except for the very top wines – funnily enough, the ones above that we visited! So, if you must get your hands on a few bottles of the very special Châteaux Margaux or Cheval Blanc 2012, it is probably worth buying them en primeur.  However, if you are looking at lower classed growths or Cru Bourgeois level, where there are some excellent wines, there does not seem to be a strong commercial reason for buying now rather than in 2 years’s time when the wines have been bottled and shipped.