‘Feast your eyes on that lot.’, I texted while being unable to turn my eyes away from the treasures which lay before me.  A 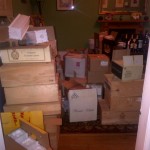 kind of delirium set in along with a state of dread. I was in awe. The items which currently lay on my dining room floor so rarely graced my table singly, let alone in the quantities which I now gazed upon. Lovingly. Worryingly. The value of these wines was akin to several holidays or a pretty nice car or myriad pairs of shoes.

A few weeks before, a client who became a friend after a trip to Bordeaux, was moving back to the States. He couldn’t take his wine with him, easily at any rate, so he wanted to sell his collection. Might I be interested? Having quickly scanned the list, I confirmed I was. He pressed for a definitive answer and price I would pay so I settled down to value the spread sheet. I quickly realised that this was not the sort of money I could afford to spend casually (3 kids at school/university who, as well as being educated selfishly expect to be fed, clothed and shod) but before I had replied Chris sent me a further email to the tune of ‘oops, I forgot to send you the list of the really good stuff’ which included first growths galore.

This was out of my league and so I declared. But Chris wanted rid and wanted rid quick. I offered to find buyers, sell on his behalf but if I were to buy it I could only offer him a fraction (a reasonable fraction to be fair) of what it was truly worth. If the deal could be done pdq, he said, then he was in. Gulp. Now to have a word with my ever-understanding and generous husband who is, however, a financial advisor.

I’m not sure if he was weighing up the purchasing of Manilo Blatniks* and Jimmy Choos* whilst he considered the situation, almost certainly not, but green fees and school fees may have fleeted across his mind. Anyway he agreed, especially sweet of him seeing as he is only allowed to touch one rack in the cellar unsupervised.

The money was raised, the wine was delivered. It took a whole afternoon to unload and check off with a very patient and kindly delivery man from Vinoteque who told me he had never delivered such a large quantity to a private address before. I think he may have been trying to suggest that most people aren’t as bonkers as you are, madam. Or such a lush.

All was in order as I knew it would be and now the job of finding a home in the nursery, I mean cellar, lay before me. I lost count of the trips I made down the 15 steps, ever so slowly, ever so gingerly, but just as once the baby is born the pain is immediately forgotten so it was with this labour of love. My legs, arms and back ached I’m sure but I have no recollection of it at all.

I let Chris know how delighted I was with my new ‘bursting at the seams’ cellar and wanted to commiserate with him that he had had to leave it all behind.  He believed he could live with the situation because his really good stuff was actually in the collection he had accumulated in the States!

We both then have a lifetime ahead of us of drinking and sharing wonderful wines. This is a time of feast not famine and I am so grateful to Chris for the opportunity to own such treasures of pleasure.

*shoes I will now never own. 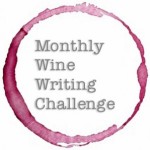 My little contribution to the November Monthly Wine Writing Challenge whose theme is FEAST.