You may never have heard of Moulin Touchais before now but you might wish you had.

The Touchais are a negociant family in the Loire Valley, in Anjou specifically, selling pretty good local wines. Their Moulin Touchais, a Coteaux du Layon, is their iconic wine, their Holy Grail, their stellar wine and all those other overly-used horrible adjectives but which in this case are truly warranted.

Made from 100% Chenin Blanc from an early-picking of under-ripe grapes, and ripe, and sometimes lightly botrytised grapes picked late over three tries (separate pickings), this is a maverick wine. Fermentation from indigenous yeasts lasts several months, the blend is made, the wine is bottled immediately and then it remains in the chalk underground cellars for a minimum of ten years. A decade gathering dust but also a whole load of complex and interesting flavours. Talk about patience. Talk about delayed gratification. And as if ten years weren’t long enough, once released, Moulin Touchais can happily lie around for a life-time; the family guarantees the wine for 100 years. The current owner has recently enjoyed an 1861 from over a million bottles of various vintages stored in their cellars.

The oldest I have tasted is a mere 55 years old but the tasting of that 1959 has been added to my list of Memorable Wine Moments. What’s intriguing is that the most youthful, the current release is 2004, is also absolutely delicious and it and the 2002 were in my top 4 of the 13 I was lucky enough to taste at a vertical tasting.

The joys of the wine are manifold: the acidity is vital, lively, sometimes even searing so that the 80/90gr of residual sugar seems barely noticeable but the barley sugar, caramel and honeyed notes remind you that it’s definitely there. 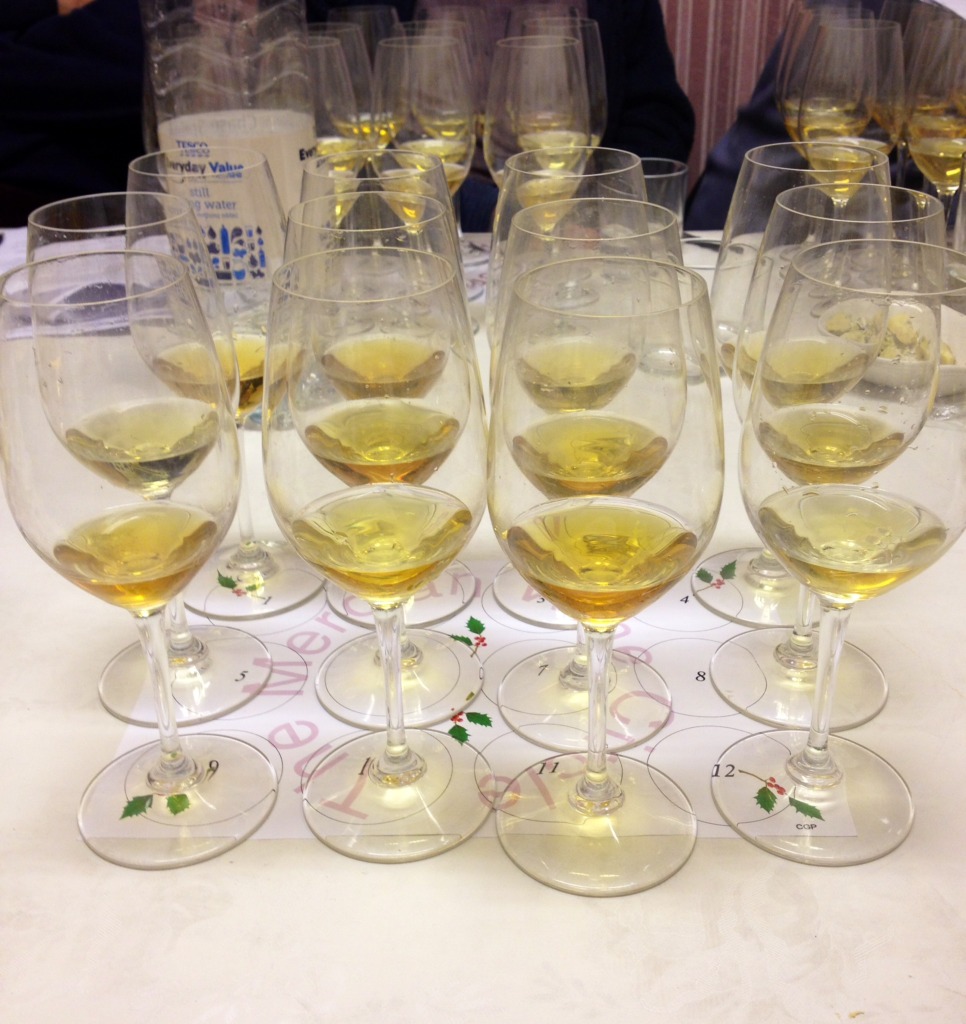 Not cloying, still lively and lifted. Think of melted butter on crumpets with a touch of citrus zest and honey and you’ll get the idea. But there’s also Crunchie and a lovely spiciness. This is pretty much perfection in a bottle and I’m honoured to have been able to taste it.

Evolved in colour and taste but still showing no signs of fading any time soon. Marmalade, ginger and the ubiquitous barley sugar. Rich and rounded but with a medium, rather than full-on, intensity.

Some thought this was corked, I didn’t. It had notes of black treacle and a slightly earthiness to it along with ginger and toffee. The acidity seemed less pronounced than some of the other vintages but it was long on the palate.

This was in several people’s top 3. It was the most syrupy of the tasting, pretty rich though the acidity did balance this out. The complexity was not as marked either. But these are comparitive remarks, tasted on its own I have no doubt I would have scored it highly.

Wow. Searing acidity but in a good way. Actually a great way. Orange peel and barley sugar flavours. This is vibrant, edgy and hedonistic. I loved it.

Of all the wines, this seemed quite sweet whether that was due to more residual sugar or slightly lower acidity I have no idea – there seemed to be slight botrytised aromas. There was butterscotch and a smokiness (but they don’t use oak) in this wine.

An intense, balanced wine: mature yet youthful. Concentration and subtlety. Elegance and power. Honeyed, oaky (there’s no oak!) and a store cupboard list of spice aromas.

M. Touchais informed us that this is one of his all-time favourites and certainly it went down well in the group. It offered much in terms of aromas – lemony, honeyed, vanilla (there is definitely no oak used!) and then these on the palate along with a whip-smack of acidity make it a great wine. One for the very long haul.

Very fresh and pretty, floral and grapefruity. So well balanced, such elegance. One of my favourites of the tasting to drink now or in my dotage, preferably both.

Very aromatic, toffee, caramel and barely sugar flavours. Possibly the most dessert-wineish wine of the tasting, perfect with tarte tatin.

Beautifully fresh and vibrant and somehow delicate despite the impact of multifarious flavours. One of favourites. 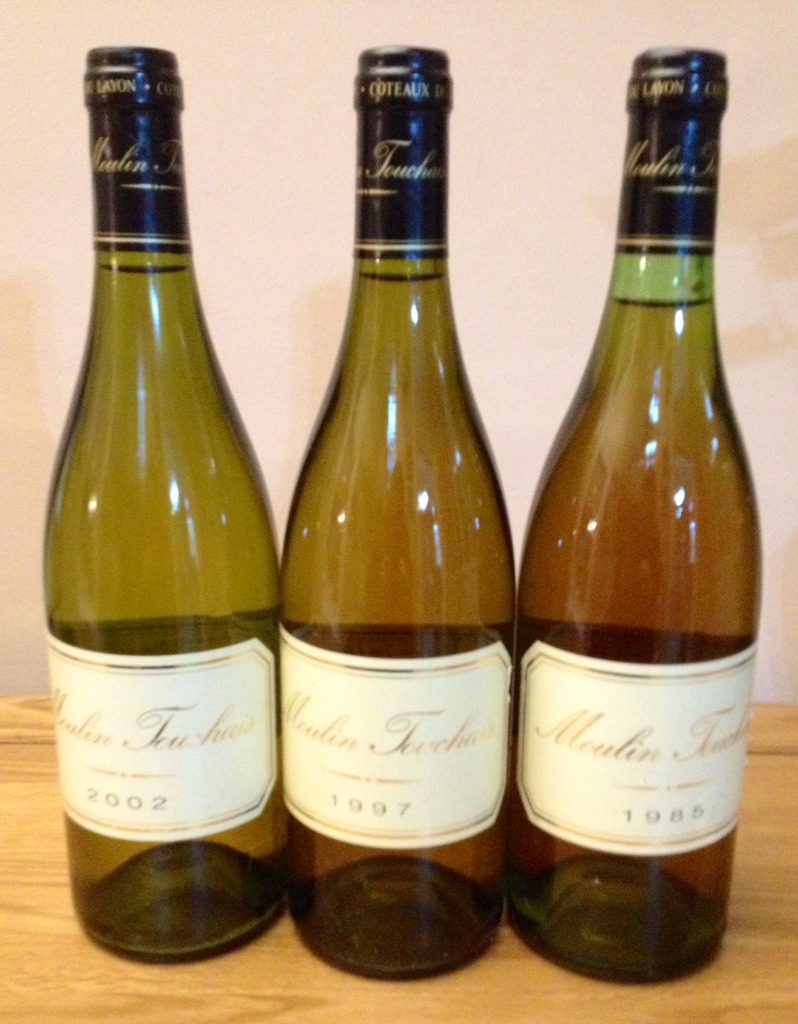 Moulin Touchais are outstanding sweet wines which can enjoyed as an aperitif, with cheese and with dessert. Had you bought a case a few years back when Majestic were selling them at under a tenner a bottle, you’d be quids in. Now, depending on the vintage, you’d have to fork out somewhere between £25 – £50 (much more for the older and, therefore, very rare vintages) but, let me tell you, you may not have heard of them before, you might have missed the chance to buy them inexpensively, but these are wines which are worth every penny at today’s prices. there was no Moulin Touchais made in 2008 or 2012 so expect vintages around these to be in high demand – remember that in 5-10 years’ time.

PS The photograph of the wine glasses shows how we tasted the wines, with a wine from each decade in each flight which we had to identify. Actually not that difficult. Had we not been able to see the colour and had to judge the age of the wines by taste alone, now that would have been tricky.