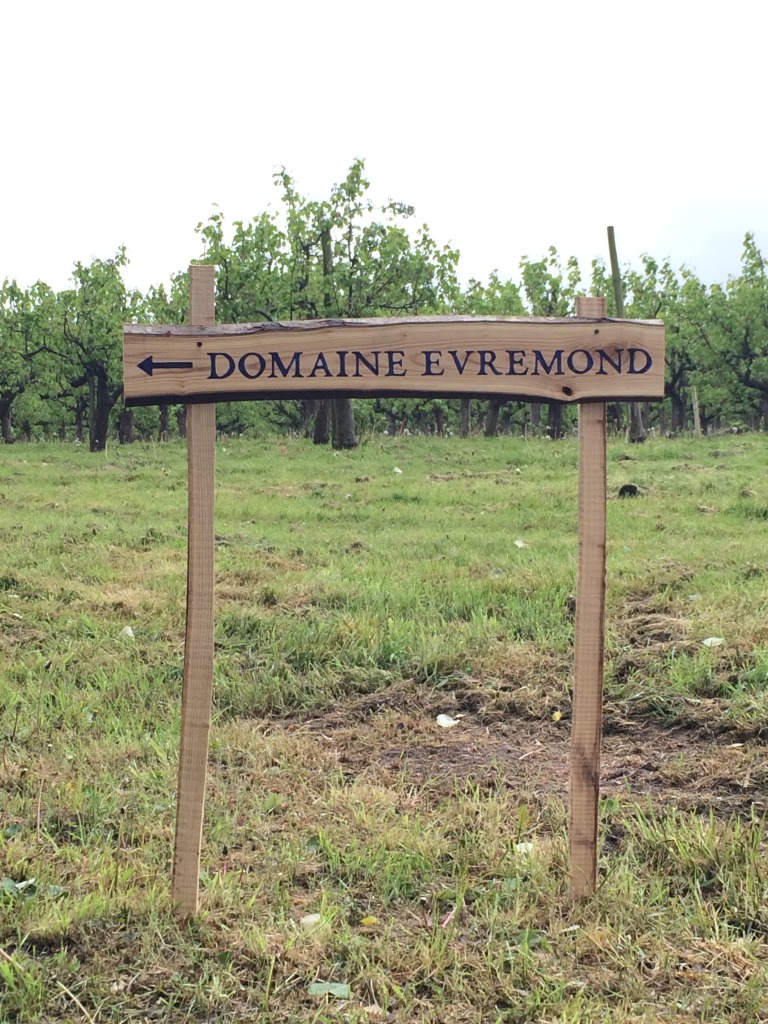 No one has ever accused me of having green fingers. Yet that is actually me digging about in the mud (viticulturists might call it soil, possibly even terroir). And smiling. (And thanks to Susie Barrie MW for being my photographer). 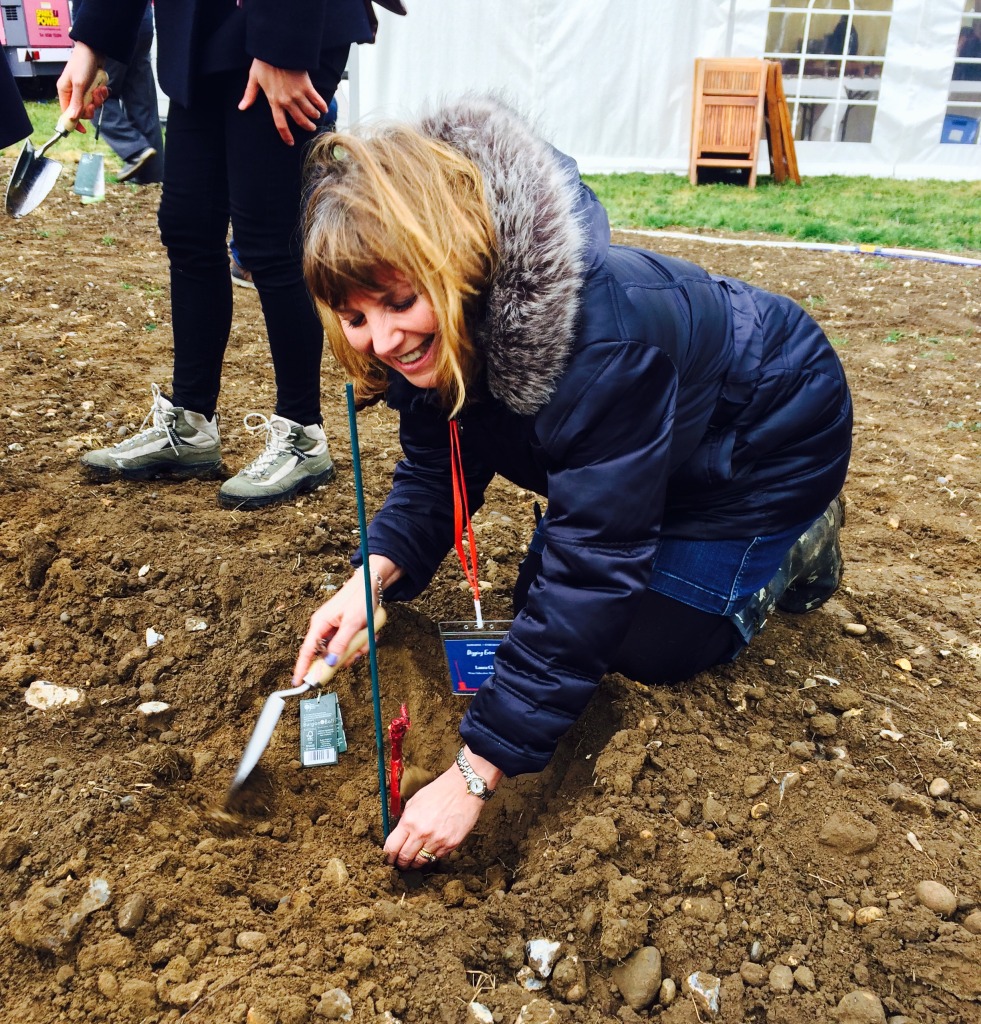 The explanation for this sudden change of character is that I am planting a Pinot Noir vine (Plot 13, Row 1, Vine 7 to be precise) for Domaine Evremond.  In 6 or 7 years’ time, I hope to be enjoying a class of English sparkling wine from its first vintage.

If the name Domaine Evremond sounds a bit French to you, then you’d be right. Pierre-Emmanuel Taittinger, president of family-owned Champagne Taittinger, together with its UK agent, Hatch Mansfield, and friends, have bought and prepared 20 hectares of land in Chilham, Kent, planting 100,000 vines aiming to produce around 300,000 bottles of quality sparkling wine to boost an already buzzing English wine scene. The estate is named for Charles de Saint-Evremond, a Frenchman who, when exiled to England, brought his Champagne habit with him. A writer and literary critic he is buried in Poets’ Corner in Westminster Abbey. 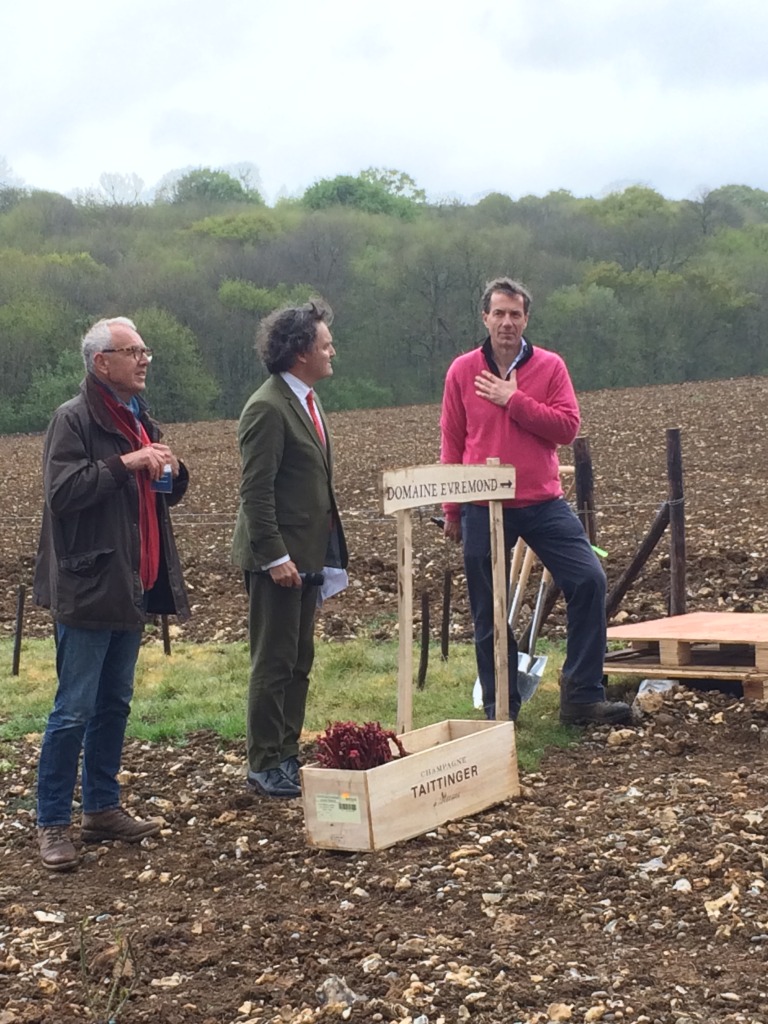 This is not the Taittinger family’s first connection with England. When he was mayor of Reims, Champagne’s capital, Pierre-Emmanuel’s father arranged the twinning of his city with that of Canterbury. There is clearly a strong tie with Blighty, strengthened no doubt by, as Pierre-Emmanuel describes, the ideal ‘combination of chalk soils, climate and topography of our site.’ And it was truly heartening to witness the entente-cordiale between him and his close friend, Patrick McGrath MW, MD of Hatch Mansfield. 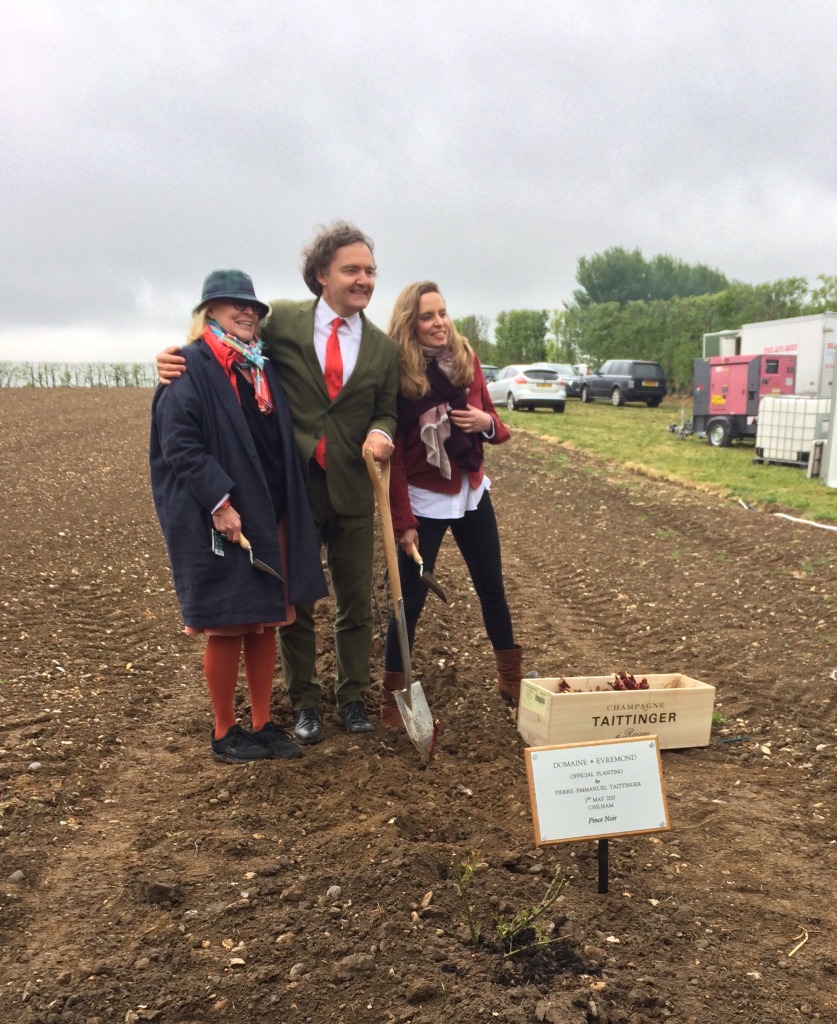 Despite 80 years of wine-making family history, Pierre-Emmanuel, with his wife and daughter, paid tribute to English sparkling wine and local wine producers some of whom were present showing just what England is capable of. There was no evidence of superiority – on either side – but a wealth of collaboration for the continued development of English wine. Pierre-Emmanuel talked of French vines in English soil; of Taittinger’s French viticultural team working with England’s leading viticulturist, Stephen Skelton MW; of the German operator of the German made planting machine; ‘Brexit does not exist in our heart’, he said. He expects, however, not to export to France for the very good reason that the wine will all be drunk here. Lucky us. 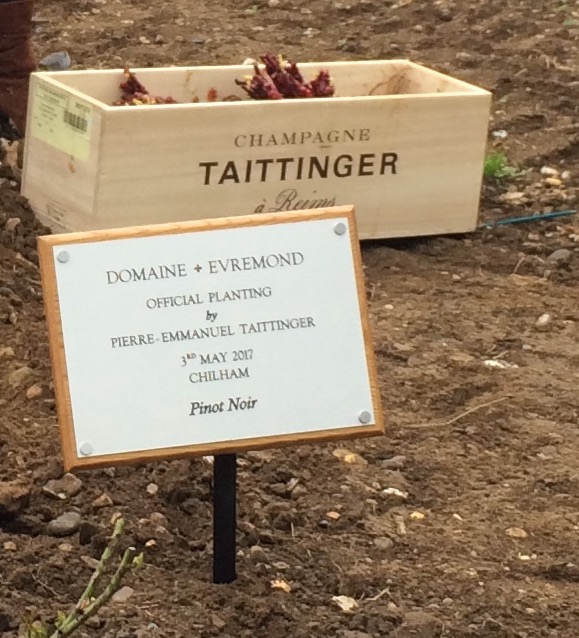 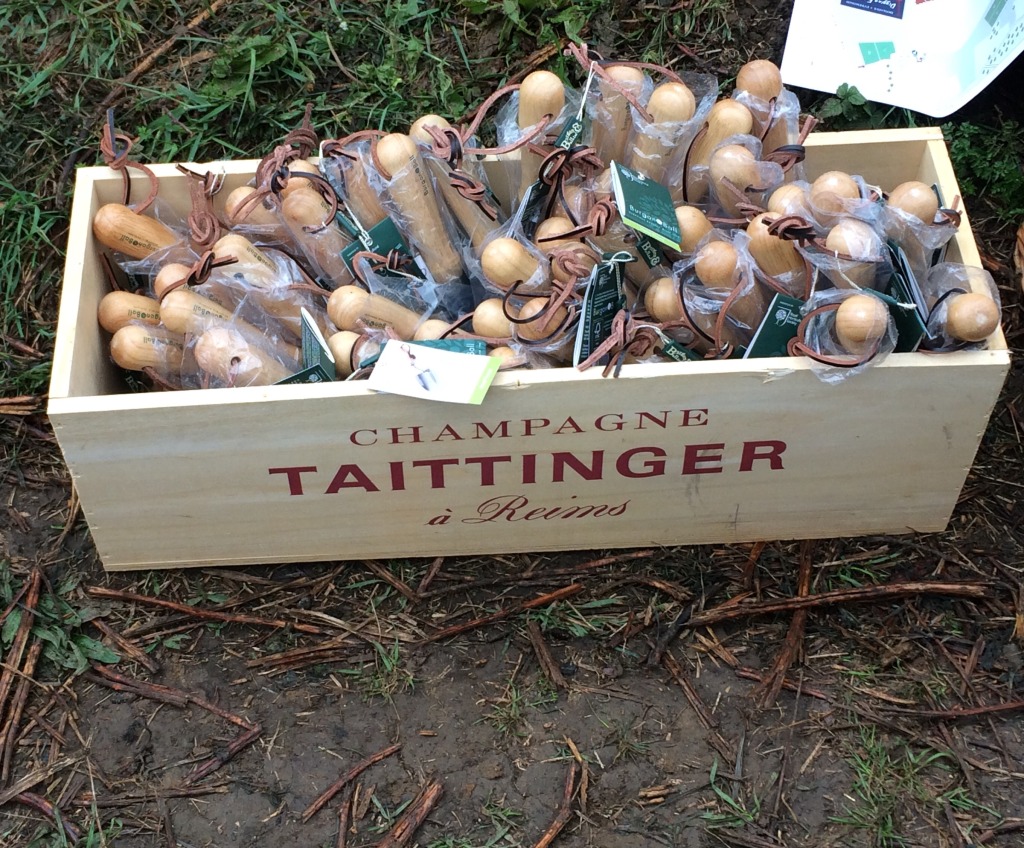 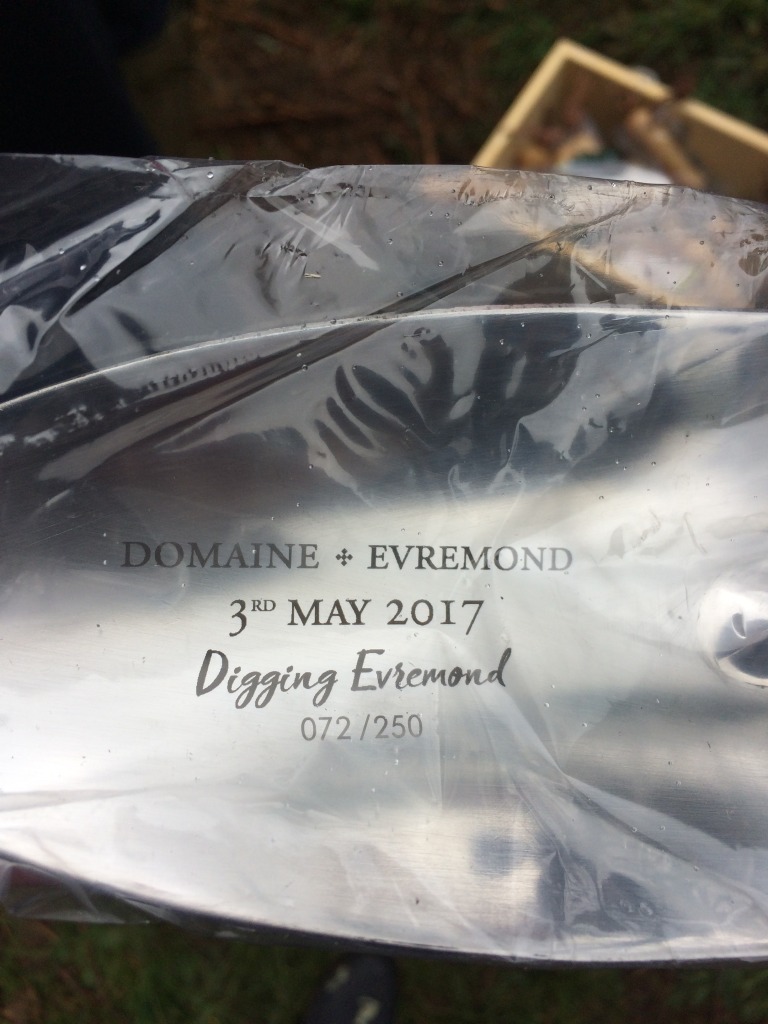 The initial 20.13 hectare plot will be planted to about 50% Pinot Noir, 36% Chardonnay and the remainder to Pinot Meunier, with a further 10 hectares to follow. My vine ( I feel we developed a very close relationship in the few moments I held it and inexpertly planted it in the cold damp earth in that Chilham corner of the Garden of England), I suspect may have been re-planted by someone who knew what they were doing. I’m ok with that if it ensures its survival and means that I will be able to taste its wares in a glass of Domaine Evremond in the years ahead. If it produces wine of the calibre of its French cousins, it, and I, will have done our job. 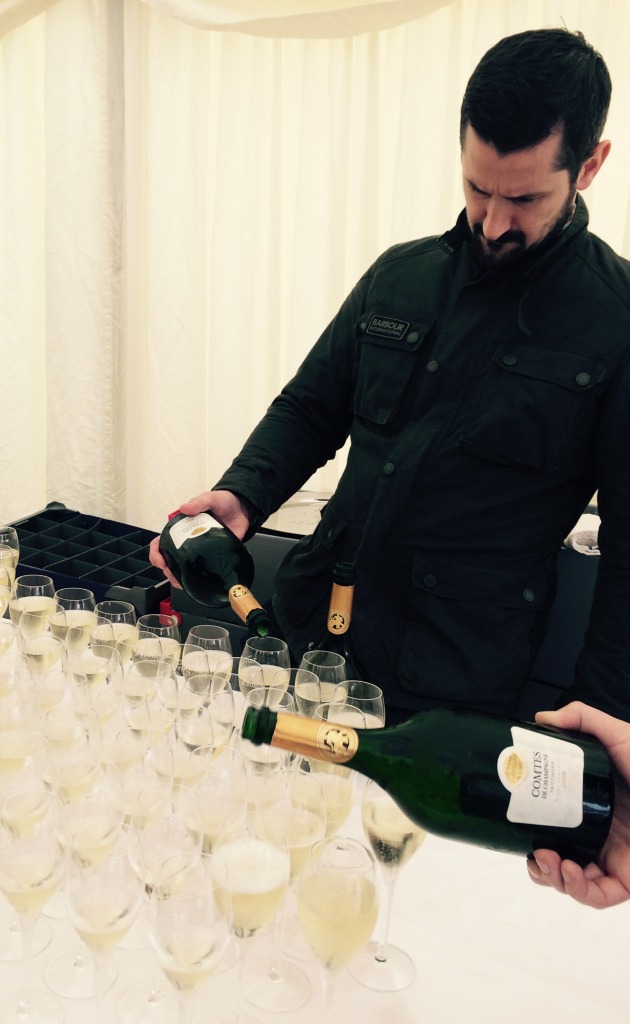 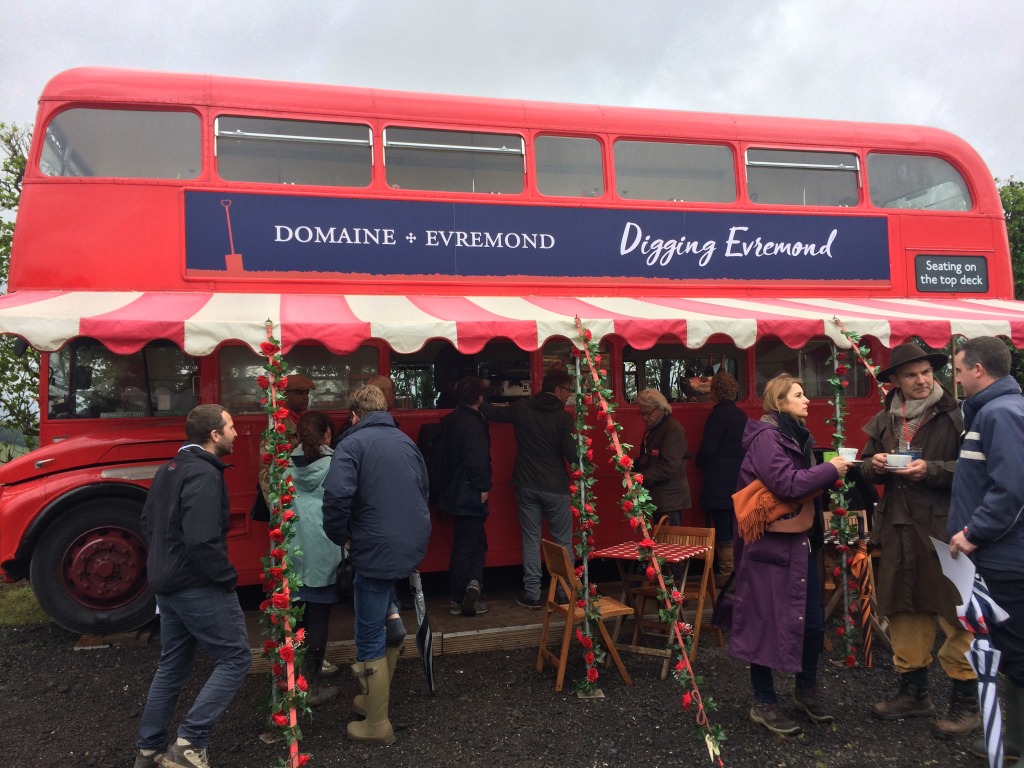