English wine is on a roll. English sparkling wine rocks. So how is it that there are still so many wine drinkers in the UK who have yet to give it a go? It’s particularly surprising given the recent coverage in the national press about Champagne Taittinger investing in 69 hectares of vineyards in Kent. Surely that suggests that England has both the soil and the climate needed to produce good, even great, fizz. Those of us who are enthusiastic drinkers of English Sparkling Wine (ESW – please can someone come up with a roll-off-the tongue term for it? And soon!), are well aware of the names synonymous with quality – quality, dare I say it, to rival Champagne. Nyetimber and Ridgeview are two such eminent producers, both fathers and pioneers of ESW production, but there are some less well-known names which deserve recognition and credit for promoting ESW simply by producing decent wine that is mostly sold and enjoyed locally year after year.

Astley Vineyards is one such name, situated in Worcestershire, half a mile from the River Severn, and owned for the last twenty odd years by Jonty Daniels. After considerable research into which varieties to grow, the vineyards were planted on sandy loam free-draining slopes by Daniels’ predecessors back in 1971. The 2ha plot is a ‘‘lopsided rectangle split into 4 blocks’’ and is planted to Madeleine Angevine, Bacchus, Kerner, Siegerrebe with a tiny amount of Seyval Blanc. Seven or eight different wines are generally made each year, one of which is sparkling.

Astley George Eckert Brut 2013 is made from 100% Kerner, a German cross between Schiava Grossa (aka Blauer Trollinger or Black Hamburgh) and Riesling, since you ask, and Daniels wonders if it could possibly be unique. Apparently it isn’t. Other examples of sparkling Kerner are made in the Veneto and Australia though I’m pretty sure it must be one of a kind in England, since only 9ha of the grape exist here.

This bubbly is made by the Traditional Method. Of course. I may have offended Daniels by even asking such a question but, in my defence, I did so before tasting it and the effervescence certainly suggests the superior production method.  At Astley they are justly proud of the high quality of wine they are producing and cite in their leaflet that 85% of all Astley wines ever made have won an award, ‘‘a significant number of them have been at international level’’.

Of all the varieties grown on the estate, Daniels picks the Kerner last which is unusual for grapes used for sparkling wine – typically they would be picked early to maintain acidity – but Kerner is late-budding and slow to ripen, so is left on the vine for as long as possible. Daniels complains that this variety sees him in the vineyard, cutting it back, controlling its vigour more than the other varieties put together, and grumbles that he could spend his whole summer doing nothing but that. So does his hard work pay off?

After 18 months sur lattes, the wine is certainly a tribute to the grape, its terrior and Daniels’ hard graft, too. It also pays homage to Daniels’ stepfather for whom the wine is named: ‘’We bought Astley’s Vineyards in 1993 and at that time, with a few enlightened exceptions, the prevailing wisdom was that involvement in English wine demanded remedial attention from a reputed psychiatrist. Although quick to point out the financial perils, George was uniquely supportive of the idea. For such valour beyond the call of duty, he gets a wine named in his honour.’’

A dry, crisp and refreshing bubbly with a gentle and lasting fizz; with 18 months on the lees, there’s a peachy roundness balancing the sherbety, citrus acidity and a finish of bitter almonds and white pepper. I’m sure George would be proud. £19 from the Astley Vineyards.

A mere 20 miles up the road, in Staffordshire, the Vickers family runs Halfpenny Green Vineyards and has done since 1983 when father, Martin, planted half an acre to vines. Today they have almost 30 acres (12 hectares) making it one of the largest vineyards in the UK. Known particularly for its expensive red from Rondo, the estate produces a range of wines including a white and rosé fizz from the grapes you might normally expect for an ESW. The Brut 2013 comprises 70% Seyval Blanc with 20% Pinot Noir and 10% Chardonnay. Bottled fermented with 10gr dosage, the wine spends a minimum of 9 months on the lees, but as the wine is bottled in batches many bottles may have been kept for as long as 18 months before release. A winner of a Bronze Medal at the International Wine Challenge, the green apple crispness and leafy edge, the lively effervescence and candied fruit finish make the Brut 2013 a wine with English typicity written all over it.

Not so Biddenden Gribble Bridge Sparkling Rosé 2010 which takes us off-piste again. Biddenden may be the oldest winery in Kent and as such is well-established and well-known, but this is made from 100% Gamay – an oddity in the ESW category. So little Gamay is grown in the UK that it doesn’t even make it on the graph of varieties planted here, so the wine is a little out of the ordinary. For anyone earnestly putting into action their weekly 14 permitted units of alcohol, at only 11% abv., this rosé can help. It’s slightly off-dry, all lovely crushed strawberries and rose petals with a citrus lift, too. Extended lees ageing of 4 years gives the wine a serious edge alongside the charming fruitiness – perfect for the summer, but why wait? It’s available now from www.biddendenvineyards.com at £20.40 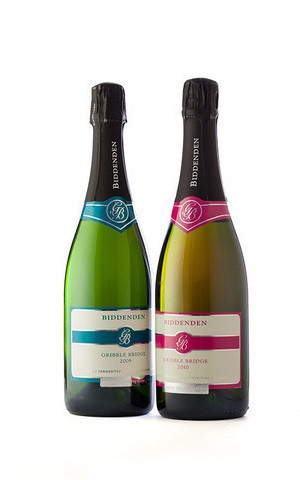 By all means buy the ‘big’ names of ESW – you may know of them for the very good reason that they deserve to be known. But seek out too, the more unusual, the not so famous, the less familiar. And if you have yet to try English Sparkling Wine, put it on your to-do list.