Apparently, you have to taste something you don’t like 17 times to convince your palate that it is something pretty tasty after all. It was true of olives for me but I’m sure some things don’t need quite so many times for a conversion from yuk to yum; sometimes it’s just down to having a different perspective to change your mind or tastes. 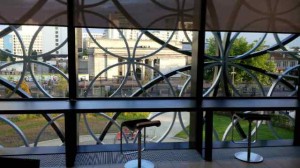 From inside Birmingham’s new library

Yesterday I was lucky enough to visit the new Birmingham Library before its official opening on Tuesday, 3rd September and I found that what I had considered up until then to be a rather weird building without the quirky appeal it might have had, was, in fact, surprisingly welcoming, refreshing and fun combining a practicality to read and learn with an attractive funkiness. The book rotunda was both a nod to Birmingham’s recent past and futuristic in its concept. The view of Birmingham from the terrace was striking and I left the building with a very different impression then when I went in. Coming at things from a different angle, I can see that the library will be a joy to anyone who uses it and a great endorsement of Birmingham being a city of learning and culture, as well as being a visually appealing new landmark. 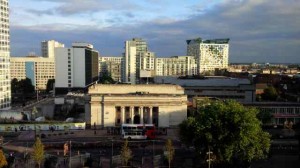 View from the library

So, and this is the point I am actually trying to make (in a roundabout-trying-to-be-clever-and-not-really-working kind of way), if you are someone who has written-off a wine because of its country, region or style I urge you to try it again from a different perspective. This probably means a wine from a different producer, drunk in different company matched with different food. You may not get that eureka! moment immediately but you may notice that the wine was better than you expected, that perhaps you would try another example of the style, that possibly you had been too quick to reject all wines which bear the same description  – for example, Germany, Bordeaux or sweet.

Open your mind (or taste 17 times) and try these from Waitrose:

Aromatic, light but with a real mineral intensity and a spicy kick making it a perfect match for Chinese and Thai food.

A red Bordeaux which is good value and easy to enjoy – fruity, spicy and supple with medium tannins. Try it with a lamb roast or Cottage Pie.

Honeyed and rich but with a zesty lift to balance the sweet and tropical fruit flavours. Drink now or in several years to come with either Roquefort or dessert such as Lemon Meringue Pie and Pecan Pie. This is a great vintage for Sauternes, by the way; perhaps worth squirreling  away a few bottles.