They know how to make wine in Bordeaux, they’ve been doing it for centuries. Grape varieties and vineyard sites were decided in the dim and distant past, viticultural and vinification practices were developed and then copied around the world, they’ve learnt how to use oak to its best advantage and the results have been held in high esteem by wine lovers ever since.

But did you know that experimentation and innovation are alive and well in many a Bordeaux château? It’s easy to witness this hotbed of innovation when you are actually in Bordeaux but three châteaux took the initiative to send a representative over to the UK last week to demonstrate very clearly that winemakers are not sitting on their laurels; quite the opposite,  they are at the forefront of vinification advances and embracing new developments.

Château Couhins, making wine in the Pessac-Leognan and Graves appellations and owned by the French National Institute for Agricultural Research (INRA), sent over  Sales Manager Romain Baillou who very ably explained  the benefits of vineyard mapping – a system developed by INRA which  allows the vineyard manager to practise what they refer to as made to measure or precision viticulture: using sonar technology, they can identify the depth and temperature of the soil which in turn affect the vigour of the vine and the ripening of the grapes. Further to that, using a system called Greenseeker, they can assess through GPS which sections of a vineyard need picking and which need a few more days of ripening so that all grapes will be picked at optimum ripeness.   Each area of the vineyard can be treated specifically to its needs: grass cover crop, fertilisers and green harvesting can all be managed depending on the vine’s, and not the whole vineyard’s, needs.  Château Couhins was also the original practitioner of the now widespread practice of sexual confusion or mating disruption, intended to limit the damage done by butterflies and their larvae; whatever you call it, the practice may not be much fun for the butterflies which produce the grape worms but it has been very successful in eradicating this parasite in the vineyard.

Both of these newer innovations will lead, in the long term, to fewer chemical treatments being used in the vineyards: undoubtedly good news for the wine, the consumer and the earth.  There is a prevailing move towards sustainable agriculture in Bordeaux and even to organic farming.  Between 2009 and 2010 there was an increase of 41% in organic vineyard area and in 2010 there were 614 chateaux in conversion or already organic, a not insubstantial number which in 2013 will no doubt be even more significant. A greener vineyard sadly doesn’t automatically mean a finer product but, if a château has done the research and is prepared for the greater challenge of managing an organic vineyard, the results can be rewarding. 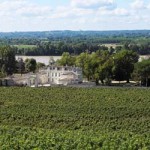 k  5 years working research before fully making the change to organic, so was prepared for the lower yields and more intense labour in the vineyard. Owner Guillaume Halley believes that, as well as being better for the planet, organic farming produces wine which is truer to its roots, an authentic Vin de Terroir with greater vibrancy. I found the 2012 more earthy than vibrant (it is still an unfinished wine) but a true representative of the Fronsac appellation and a plush, serious wine for its £14 price tag.

Vibrancy I found in abundance in the Château Marquis de Terme 2012, particularly in the wine which had been aged in their new concrete ‘eggs’ , vats so called for their oval shape. This property has 10% of these eggs in the cellar and blends the results with the traditionally barrel-aged wine. We tasted the 2012 vintage in both its barrel- and egg-aged forms. 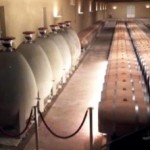 The egg-aged wines were the Blu-Ray to the barrel-aged wine’s  DVD –  – high definition wines, bright, vibrant, mineral which, on their own, may just become too much, exhausting like a beautiful, lively and edgy teenager. Blended with the barrel-aged wines they are tempered, dressed and calmed. Winemaker Ludovic David suggests that the 3000€ egg vats give roundness and purity of fruit due to the shape which allows a natural flow and a gentleness to the lees-stirring. And the more even temperature of the concrete helps to intensify the aromas. So there you go, a classified growth in Margaux going off-piste with its vinification and not only that but, it seems, also planning to be organic in about five years time.

The wines from these three châteaux are already good. Could these innovations make them even better so that they are truly great in perfect vintages and, this is key, good in difficult years? The improved technology will ensure more great and lasting vintages and guarantee Bordeaux’s enduring legacy.

As a PS I really should add that the Château Couhins Blanc 2007 and 2011 were striking though of course 4 years makes a big differnece to their taste. And the Château Marquis de Terme 2005 was excellent put forward as a wine for current drinking but I would have no qualms about keeping it for ten years more.

For a blog showing how these wines work with food, read Tom Lewis’ Innovation and Change in Bordeaux